"A Dangerous Game" By Ashley Blade 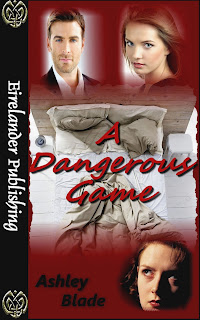 Suzy is a “three strikes and you’re out” type of girl. She has had her heart broken one too many times and has all but given up. Well, until Trace enters her life.

Like her, Trace has been sent through the wringer, and with his total guard up he is only looking for a casual thing and with Suzy he's found it.

Now it's up to Suzy to make things right and claim what is her destiny.

A Dangerous Game, Ms. Blade's new release, will be available in May 2010 from Eirelander Publishing http://www.eirelander-publishing.com


Excerpt from "A Dangerous Game" By Ashley Blade

Suzy stood at the front of the restaurant waiting for the clock to hit eight. Trace was supposed to meet her there for their weekly adventure. Each time they were someone different, a nurse and a fireman, police and a bank robber. Suzy laughed just thinking about their little adventures. Tonight however, she was the hostess and he was the owner of one of L.A.’s finest establishments.

She looked toward the door; he was running late and Saul wasn’t going to allow their little role play interfere with his service any longer than it had to. Come on Trace, where the hell are you? she silently chastised him.
“Sweetheart, if he isn’t here in twenty you have to go, you know I can’t risk PD taking my license, especially after that little incident a couple of months ago.” His Spanish accent was thick and alluring.

“I know Saul, I promise he will be here.” Suzy knew he would show, but sometimes he could be an ass about it. They weren’t in a traditional relationship…it was more of a convenience for them. Trace had his heart broken one too many times and so did she, so love was the furthest thing from their minds.

The swooshing of the front door jarred her from her thoughts. Trace stood before her with a beautiful woman on his arm. Any thought she may have had of role playing with her lover were gone, leaving Suzy cringing. She was not the jealous type but damn, did he have to rub it in her face that he could have any beautiful woman he wanted and she was doomed to be practically alone?

He walked toward her, his cocky grin firmly in place. The redhead he sported on his right arm oozed sex and screamed ‘take me now.’ Suzy felt something raw and primal fill her senses. She wasn’t sure if it was jealousy or lust. Who are you lusting after Suzy-Q, the woman or Trace? “Does it matter?” she mumbled to herself.
“Does what matter?” Trace asked taking his normal place beside her.
“Nothing,” she growled, but blushed when he cocked his brow at her. “Who’s the cheap trick?” she asked changing the subject. Trace squirmed.
“She was going to be our playmate for the night but if you want I could toss her,” he chuckled as the redhead snarled at him.

“I didn’t say toss her, I was just curious.”


The bright lights of the Hilton Marquee filled Trace’s BMW and blinded Suzy for a moment. Her teeth chattered from nervousness as she sat in the front seat. She was used to their hum drum sex life, vanilla was what Saul called it, but now Trace was adding an element she wasn’t so sure about. Before she could voice her concerns the valet had opened her door and was helping her out.

“Welcome to the Hilton, we hope you enjoy your stay,” he said smiling at her.

Oh yeah, she was definitely going to enjoy her stay. Trace had something planned, she could feel it; what it was though, she had no clue. “Thanks,” she murmured.

Traced stepped around the vehicle and wrapped his arms around her and their faithful companion for the night. Was it rude of her to not inquire the woman’s name, or was this part of the role play? Suzy wasn’t sure, but when Trace’s hand squeezed her hip desire began to pool between her thighs. She wanted to hate him—hate his ability to draw those responses out of her, but she couldn’t.

“You two wait right here and play nice while I get the key,” he grinned kissing both women on the cheek.

Suzy decided she would be the bigger woman and play nice. “Hi, I’m Suzy, sorry about earlier.” She extended her hand out to the other woman.

The redhead looked down over her pert nose at Suzy, “Are you talking to me?”

Bitch, she thought lowering her hand. “Yeah, I mean if this is something Trace wants to do, we should at least get to know each other a little before we fuck or whatever.” She was nervous and when she was nervous she blathered on like a school girl.

The woman laughed, “What makes you think he wants both of us, especially when he can have me all to himself?”

Suzy scowled and turned away from the woman. Whatever it was she felt began to falter as she looked for Trace. “Well, someone will have to remove the stick you have stuck up your narrow snatch before he’ll want you,” she smirked as Trace rejoined them.