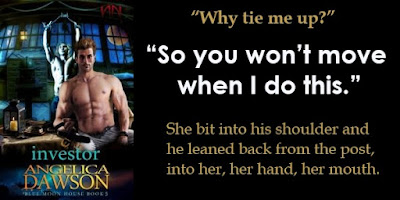 Blue Moon House: Investor
by Angelica Dawson
Amazon - Amazon UK - All Romance Ebooks - Smashwords - Nook
Terrance is fascinated with the vampires of Blue Moon House. When a fire leaves them homeless, he seizes the opportunity to put them in his debt and himself into their hearts. They agree to his proposition of a new house in America and set off on a voyage of wonder, danger and pleasure.

Investor is the fifth installment of Angelica Dawson's Blue Moon House series. With each subsequent volume set further into the past, there is no need to read these books in order. Just pick it up, and enjoy!

She rubbed her hand over his hot skin, sliding a finger between his cheeks. He bent over, enjoying her touch on his ass and cock. His hips moved, swaying. She pressed hard against his puckered hole and he winced a little as she pushed in, her nail seeming to bite. As soon as her finger was inside, however, he felt only pleasure, rocking his hips back and forth in a steady rhythm, fucking her hand. At the same time, her finger fucked him.
“So good,” he told her and turned his head enough to see her smile.
“Come for me,” she instructed, working both hands together. “I want to see it.”
She did, his face displaying every sensation as it came and went, his jaw slackening as he erupted onto his sheets.
She released him and pulled him onto the bed with her, her hand stroking his hair, his cheek. “I wish I could keep you,” she murmured.
He reached up to take her hand. “You can. I am yours, Lynn. Yours and Nicholas’ and Sophia’s. I want to be with you. I don't want to die.”
Where had that come from? He hadn't thought about death. Except that he had been dealing with his father's for the last two days, distracting himself by catering to his guests. He knew, logically, that he would die one day. Had his father's death had more effect on him than he believed?

Angelica Dawson, bestselling Naughty Nights Press author, has been writing for several years and having sex a lot longer than that. Angelica is a wife, mother and environmental consultant. Her love of plants and the outdoors is not diminished by the bloodsucking hoards -- mosquitoes and black flies, not vampires. She can be found on Facebook, Twitter and her blog, where she regularly posts excerpts from published works as well as those in progress.