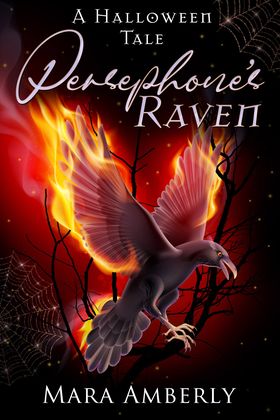 I always believed mythology to be stories from the past, but what if they're prophecies... and now they're coming true?
I didn't want to take my little sister trick-or-treating on Halloween night, but I'm glad I did.
I'm surprised to meet a handsome stranger with an otherworldly air in the shadows. At first he intimidates me, but when our paths cross again at a masquerade party, I have the chance to get to know him. I find him captivating, but I doubt his claims that his name is Hades—the name belonging to the Greek God of the Underworld. After all, what are the chances it's his real name, God or not, when my name is Persephone—the same as Hades' mythological queen?
What's he going to say next? That he's the real Greek God of the Underworld? That we're destined to be together? It seems more likely he's trying to win me over, and yet, I want to get to know him better. I'm drawn to him more than other men; the difference is like night and day.
I'll give him a chance, but I don't believe he's the real Hades or that we have a special destiny. Of course, I've been known to be wrong.

“So what do I call you?” I asked him, wondering if I should be using ‘Your Majesty’ or a term of respect like that.
“I told you,” he said. “My name is Hades.”
“Then I will call you that,” I promised him.
The room was steeped in luxury, but his attention wasn’t on it; it was on me. In my normal, everyday life I might’ve questioned why, but in this land and in my dream, I merely took it as a compliment. We walked on through his castle, and when we reached another room, which seemed a more relaxed reception room, we sat down together at a wooden table.
It wasn’t lost on me that the castle was exceptionally well-kept, with tapestries decorating its walls, ornate chandeliers, and many beautiful relics and paintings from all over the world. It made me wonder when he had gathered them, if he’d done so himself, but my instincts told me he had. I could sense his touch on everything in our surroundings, even the castle itself. It truly felt like his realm.
“What are you thinking about?” he asked me, as he leaned forward over the table, steepling his fingers beneath his chin.
I shook my head, because it was hard to explain. “I’m just experiencing this—your castle, the world it’s in, Hades.”
His name felt strange as I spoke it, as though it held more power here than in the mortal world. I finally understood then that speaking his name had meaning, and there were many who might not have dared to speak it at all.
“This is the underworld,” he told me, as he regarded me with interest.
“I know,” I answered softly. Prior to meeting him, it had merely been a concept, but now I knew it was real, and I was here for a time. I glanced out the window. It was stained glass, and patterned in blues and greens, but I could tell that the day was growing darker outside. It seemed night was swiftly approaching.

Where can readers find Persephone's Raven?

The veil is thin. Darkness calls. Will you answer?

Halloween curses plague the daring heroes and spunky heroines in this spirited collection of tales. A Cursed All Hallows' Eve brings you 20+ stories stuffed with everything from dark gods to brooding shifters, delivering hours of decadent, pleasure-filled reading from bestselling and award winning urban fantasy and paranormal romance authors.
If you can't get enough of those supernatural creatures—vampires, ghosts, witches, demons, and fae—this limited edition collection will alternately thrill you with the spicy and tempt you with the sweet. Delve into these worlds where the living haunt the dead and the undead tempt the breathing.
Answer the call, because this Halloween, not all the costumes are disguises.

Hello and welcome, readers! We have Mara Amberly here with us today. Mara, thanks for visiting us.

How long have you been a writer and how did you come to writing?

One of my majors was in journalism at university (and I later studied a Masters in editing and publishing), and it improved my writing quality and speed. Around fifteen years ago, I got into text-based online roleplaying games, including freeform and system games. I GM’d games over the years: mainly 7th Sea and Serenity, but also other games like Legend of the Five Rings and Stargate. I think that time spent GMing and playing in games built up and improved my fiction-writing skills. I wrote my first book in 2015, and my first novel in 2016.

Tell us about your title featured in: A Cursed All Hallows’ Eve

‘Persephone’s Raven’ is a clean paranormal romance story mainly set during Halloween. It tells the story of Persephone, a student who lives at home with her family. She had party plans, but they were canceled and she was asked to take her younger sister, Deanna, trick or treating. While they’re out, she learns that someone might have seen a ghost in the window of a deserted house up the street, and she and Deanna check it out. The events of the evening lead her to meet a man who calls himself Hades.

How did you come up with the storyline?

I had the idea of writing a romantic story about a god and a human woman. I was originally going to make it a darker story than it is, but as it took form, it came out lighter. I had ideas in mind before I started, but I made it up as I went along. I’d best define myself as a plantser – kind of halfway between a planner and a pantser. I usually plot out a framework for longer stories and plan out early chapters in detail, but this was a shorter story at around 10k and I didn’t need to plan that much.

What inspires you to write?

I feel compelled to write and put stories out there. Ideas just come together in my head, but I’m very much a visual person, so I’ll usually create or buy a cover before I’ve even written a story. It’s part of the process for me. Sometimes images inspire me to write, but usually ideas do. I watch a lot of shows (mostly sci-fi) and the genre I’ve read most is epic fantasy. I feel like things I’ve really enjoyed inspire me to want to create things of my own that are (hopefully) equally epic.

Tell us about your other books:

I’m currently focusing on my A Paradox of Time series, which is time travel sci-fi. It’s probably my favourite series to write so far. I’ve written books 1 and 2, I have the prequel novella to write next (in that series), and I have covers created and bought up as far as Book 4 already. I’m just planning to keep writing books in that series for as long as   I feel inspired to.

I’m planning to write another book in my Sisters of Destiny series. It’s epic fantasy, and I currently have books 1 and 2 out.

I have other book plans too, but I’m just going to focus on these ones for the time being, because you can’t write everything at once.

Where can readers find you?

Mara Amberly is an author of epic and urban fantasy, time travel and military science fiction, and roleplaying game content. She's a trained journalist, editor and web developer, and she has experience working in the computer game industry in a support capacity.

She works as an author and graphic designer, and lives in Ireland with her husband.

A Cursed All Hallows' Eve Read for FREE in Kindle Unlimited