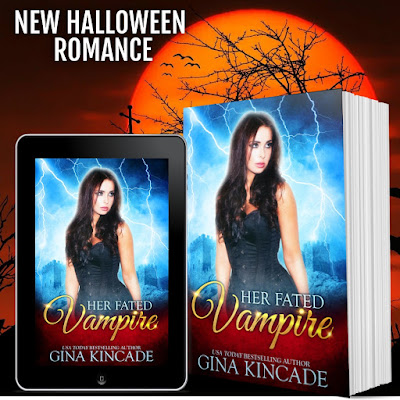 Her Fated Vampire: A Vampire Romance Short Halloween Story by Gina Kincade is now available on all major vendors for only #99cents!

There's no such thing as real vampires...right?

Carly Henderson thought attending a posh party at the home of her best friend's boss would be the same boring Halloween it had been for several years past. The last thing she expects is to spend a steamy night in an old crumbling castle. Apparently, though, things are not always as they appear, and it's going to be a night she will never forget.

Dominic Milani just made partner in his father's big law firm. To celebrate, he throws an elaborate Halloween party. Drawn inexplicably to the buxom brunette in the vampire costume, Nick may be in for more than he bargained for when he propositions her with the justification of 'just one night.'

Will Carly accept his secrets when Nick proves true that some things are not always as they seem, or is Nick destined to lose his fated mate?