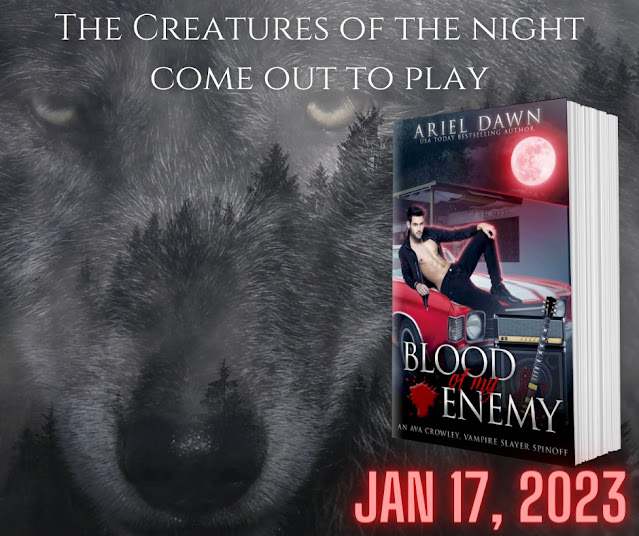 𝗕𝗹𝗼𝗼𝗱 𝗢𝗳 𝗠𝘆 𝗘𝗻𝗲𝗺𝘆 (𝗧𝗵𝗲 𝗛𝘂𝗻𝘁𝗲𝗿 𝗚𝗮𝗺𝗲𝘀, #𝟭) 𝗯𝘆 𝗔𝗿𝗶𝗲𝗹 𝗗𝗮𝘄𝗻 𝗶𝘀 𝗻𝗼𝘄 𝗮𝘃𝗮𝗶𝗹𝗮𝗯𝗹𝗲 𝗼𝗻 𝗮𝗹𝗹 𝘃𝗲𝗻𝗱𝗼𝗿𝘀!
Amazon: https://amzn.to/3MA9OgU
Universal: https://books2read.com/THG1
Paperback: https://amzn.to/3Xz2kzk
𝗪𝗵𝗲𝗻 𝘁𝗵𝗲 𝗺𝗼𝗼𝗻 𝗿𝗶𝘀𝗲𝘀, 𝘁𝗵𝗲 𝗰𝗿𝗲𝗮𝘁𝘂𝗿𝗲𝘀 𝗼𝗳 𝘁𝗵𝗲 𝗻𝗶𝗴𝗵𝘁 𝗰𝗼𝗺𝗲 𝗼𝘂𝘁 𝘁𝗼 𝗽𝗹𝗮𝘆…
The hunt is all Malcolm Crowley—scratch that, Malcolm Reynolds—knows. Ever since Mal was thrust into a world of blood, enemies, and death, he’s thought of nothing except revenge against the vampires who killed his parents and marked his sister. When a routine vamp hunt leads Mal and his fellow band of hunters—affectionately known as The Goon Squad—to a small town in the Blue Ridge Mountains, he discovers vampires aren’t the only monsters he has to worry about.
Clementine Srirocco longs for freedom. Freedom to run, to choose her own mate, instead of being beholden to the heat that determines her destiny as an Omega. When Cleo’s heat is stirred by a chance meeting with a mortal—a dangerous hunter—both of their lives will be forever changed.
Can Mal and Cleo fight the bonds of fate?
Blood Of My Enemy is book one in The Hunter Games series, filled with hungry hunters, vicious vampires, wicked werewolves, and other supernatural creatures.
#vampires #vampireslayer #vampirehunters #shifters #fatedmates #paranormalromance #booksworthreading #arieldawnbooks
Posted by Lady Gina Kincade at 10:00 AM