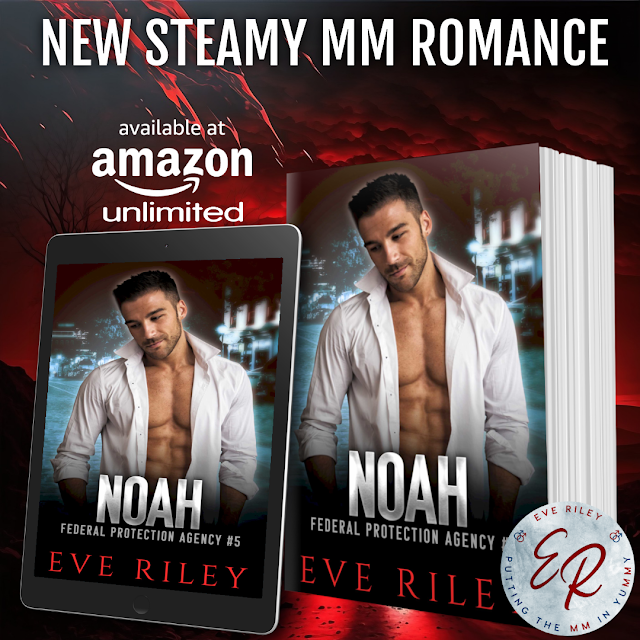 𝗡𝗼𝗮𝗵 (𝗙𝗲𝗱𝗲𝗿𝗮𝗹 𝗣𝗿𝗼𝘁𝗲𝗰𝘁𝗶𝗼𝗻 𝗔𝗴𝗲𝗻𝗰𝘆, #𝟱) 𝗯𝘆 𝗘𝘃𝗲 𝗥𝗶𝗹𝗲𝘆 𝗶𝘀 𝗹𝗶𝘃𝗲!
Read in Kindle Unlimited.
Amazon: https://amzn.to/3Er1Nc0
Universal: https://books2read.com/FPA5
Paperback: https://amzn.to/3GDUA9p
𝗟𝗲𝘁𝘁𝗶𝗻𝗴 𝗴𝗼 𝗶𝘀 𝘁𝗿𝘂𝗹𝘆 𝘁𝗵𝗲 𝗺𝗼𝘀𝘁 𝗽𝗼𝘄𝗲𝗿𝗳𝘂𝗹 𝗰𝗼𝗻𝘁𝗿𝗼𝗹 𝗼𝗳 𝗮𝗹𝗹.
Federal Prosecutor, Noah Riley has had enough of what he feels is a failing justice system. He’s watched one too many times as young victims are let down and the men who have caused them harm go free. It’s time for a change in his life, but he has no idea where to start.
Fire Captain William Clarke doesn’t get close to the men who work under him at the firehouse. He keeps his distance and his personal life entirely separate to avoid his secret coming out. His men could never respect him if they knew his preferences, so it’s simply better to stay in the closet. No man could ever make him come out—until he meets Noah and what he believes is all shot to hell in a single heartbeat.
Can these two men find the love that will change both their lives forever?
Trigger Warning: Violence, Death, and other crimes against children.
#gay #mm #gayromance #mmromance #gayfiction #manlove #gayromreads #lgbt #MMFiction #mmromreads #gayfic #gaybookseries #detectiveromance #actionromance #romanticadventure #lgbtactionandadventure #steamymmreads #everileybooks #kindleunlimitedbooks
Posted by Lady Gina Kincade at 8:00 AM