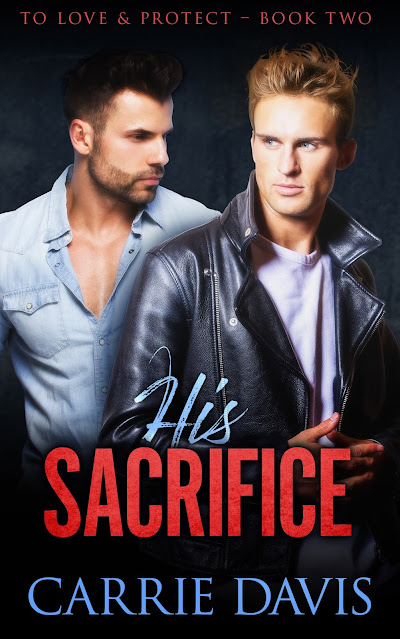 His Sacrifice (To Love & Protect, Book 2) by Carrie Davis is now live on all major vendors!

Is it truly better to have loved and lost?

At eighteen, Garrett Lennox is openly gay. His mother is his biggest supporter. Under the pretext of becoming Ozborne Hunter’s tutor in Biology, Garrett is finding it more and more difficult to keep his attraction to the star athlete a secret. Oz isn’t gay.

When they meet up for their first tutoring session, Oz admits he’s interested in Garrett but ‘coming out’ is impossible with his homophobic father.

Garrett and Oz find ways to be together and keep their relationship on the down low. Plans for their ‘first time’ go horribly wrong when they're attacked for their relationship, leaving Oz badly injured. After the assault, Oz suddenly disappears and Garrett is devastated. He is determined not to give up the man he loves and vows to find him.

Seven years later, the potential early release of one of the attackers brings Oz and Garrett back to their hometown of Cedar Point. They discover that real love and heartbreak isn't something easily left behind. They may have a chance at a future, but first the past must be laid to rest.

*The books in the To Love & Protect series can be read standalone.*