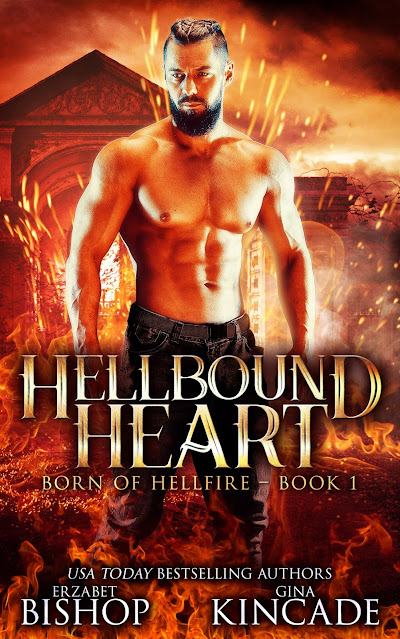 A wolf trying to mend her heart from a devastating loss…

Cat Frasier is a wolf missing her mate. She was supposed to have a fairy tale ending when she married the big, bad wolf of her dreams, but fate had other plans. Now the fortress around her heart might be too high for any man to climb. When a chance encounter puts her in the path of a possible romantic interest, does she dare let the flicker of heat inside her erupt into something more?

A tormented demon on the hunt for peace…

Dante is an incubus with an incurable lust for books. When he finds himself falling for Cat Frasier, the woman he has marked as the final soul to end his contract, he faces a heart wrenching decision. Will Dante take what he needs to feed his hunger, or sacrifice himself for the woman who has lit his own demonic soul on fire?

Dante came back to himself as Cat’s energy flooded into him. He’d tried to leave her before he could leave any incriminating evidence, but she would have none of that. The bite on his shoulder stung, but even more was the knowledge that she had claimed him before he could do the same.

In all the history of the world, he’d never heard of an incubus bonding with a prospective soul.

Gods, if Morgan knew, she’d be laughing her ass off. And so would Luc. Hell, it wouldn’t surprise him if the bastard had something to do with it.

And not just because she was a shifter.

Cock hard and aching, he groaned at the taste of her nectar still lingering on his tongue. Hell, he wanted to fuck her senseless.

Twice would never be enough.

And since when did he lose control during a dream session?

God, she really did.

He skimmed the bite mark along his shoulder, and winced.

What the fuck had just happened?

She fit against him perfectly, her movements his. He got up from the bed and stormed into the bathroom, letting the cold, harsh light bring him back to reality.

He flipped on the water to the shower and waited, hardly daring to look at himself in the mirror. These days, it was a dangerous thing to do. Dante plunged his hand into the stream and walked into the spray, hardly minding it was nearly scalding hot. Maybe he could scrub his soul clean while he was at it.

But it was far too late for that.

Hot water boiling against his skin, he took his cock in hand. If he didn’t come again soon, he was going to go insane. The erection he sported just thinking about her was becoming nearly comical.

Like one of those commercials that warned of having a hard-on longer than four hours.

He chuckled darkly to himself and let his imagination wander. Four hours to tie Cat up and show her some of the sensual tricks in his arsenal.

How he would dearly love to make her howl again.

Dante ran his palm along the length of his cock and began to pump himself hard. A bead of precum appeared, and he felt the explosion building with every long stroke. He growled and thrust harder into his hand, remembering her hot, tight heat. Beads of water cascaded down his face, and he saw the passion in her eyes as she lay beneath him. Her legs wrapping around him, urging him on, with a body built for sin and a soul that he knew in his heart would never be his to take.

That just made him all the more determined. Everyone had sin they were trying to hide. Hell, she had all but admitted liking bondage books. But at the same time, when he tasted her, all he could find was the sweet essence of innocence.

“I will have you, Red. I’ll fuck you ‘till you scream, and this time, I’ll mark you.” Even as he said the words, he knew them for the lie they were. There was something about this woman that made his heart swell just as much as his dick. Damned inconvenient was what it was.

Dante roared as his release ripped through him and his seed coated the glass wall of the shower before joining the scorching spray to spiral down the drain. Finishing up in the shower, he dried himself and padded back toward the bed where the stack of romances she’d recommended beckoned to him. As he climbed into bed and reached for the first one, the haunting gaze of the green-eyed vixen stuck behind his eyes, the memory of her softness clinging to him like a dream.

Lady Gina Kincade
USA Today Bestselling Author Gina Kincade spends her days tapping away at a keyboard, through blood, sweat, and often many tears, crafting steamy paranormal romances filled with shifters and vampires, along with witchy urban fantasy tales in magical worlds she hopes her readers yearn to crawl into. A busy mom of three, she loves healthy home cooking, gardening, warm beaches, fast cars, and horseback riding. Ms. Kincade's life is full, time is never on her side, and she wouldn't change a moment of it! Find more from Gina at: https://linktr.ee/ginakincade