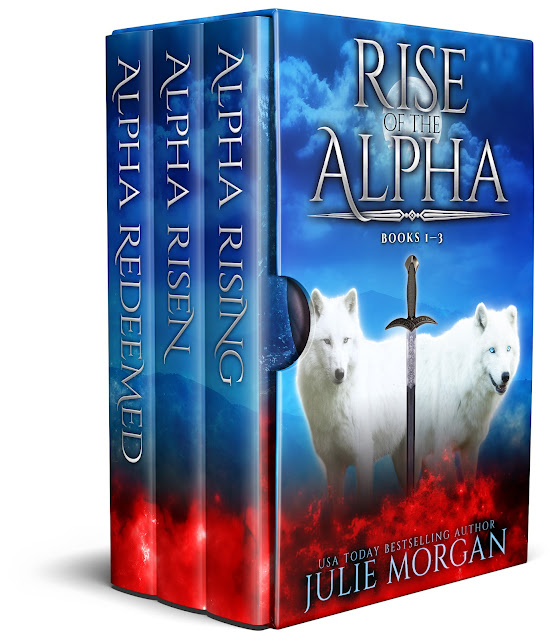 𝗥𝗶𝘀𝗲 𝗢𝗳 𝗧𝗵𝗲 𝗔𝗹𝗽𝗵𝗮: 𝗕𝗼𝗼𝗸𝘀 𝟭-𝟯 𝗯𝘆 𝗝𝘂𝗹𝗶𝗲 𝗠𝗼𝗿𝗴𝗮𝗻 𝗶𝘀 𝗹𝗶𝘃𝗲 𝗼𝗻 𝗮𝗹𝗹 𝘃𝗲𝗻𝗱𝗼𝗿𝘀!
Amazon: https://amzn.to/3uvlDxj
Universal: https://books2read.com/Alpha1-3
Paperback: https://amzn.to/3ctzDS1
𝗧𝗵𝗲𝗿𝗲 𝗰𝗮𝗻 𝗯𝗲 𝗼𝗻𝗹𝘆 𝗼𝗻𝗲 𝗔𝗹𝗽𝗵𝗮…
Killian Blackcrown knows there’s only one way to get out from under his father’s murderous rule: he must leave his pack. Abandoning his duties, he not only forfeits his birthright as Pack Master, he’s also leaving his brother in the hands of the madman. Meeting his fated mate is not part of the plan and Killian must find the power inside himself to not only rule his new pack, but to fight back against his father.
Lucian Blackcrown wants the Alpha role for himself and fighting his brother for it is the respectable thing to do. No Alpha just hands over the role of Pack Master and runs away unscathed. That is, until he meets his soul mate, the woman who makes him second-guess everything. She’s the only person he can trust with his darkness, but will it drive a wedge between them?
The two brothers could use their wolf shifter strength and work together to take down the most vicious of monsters, but can they forgive each other and become the Alphas of their own packs?
*Trigger Warning: Violence, hints of sadism and masochism, various implements of torture and pain, united with fast-paced adventure and fast-burn romance, resulting in a binge-worthy read.
#shifterromance #paranormalromance #pnr #alphamale #fatedmates #juliemorganbooks #nook #applebooks #ibooks #amazon #kobo
Posted by Lady Gina Kincade at 10:08 AM