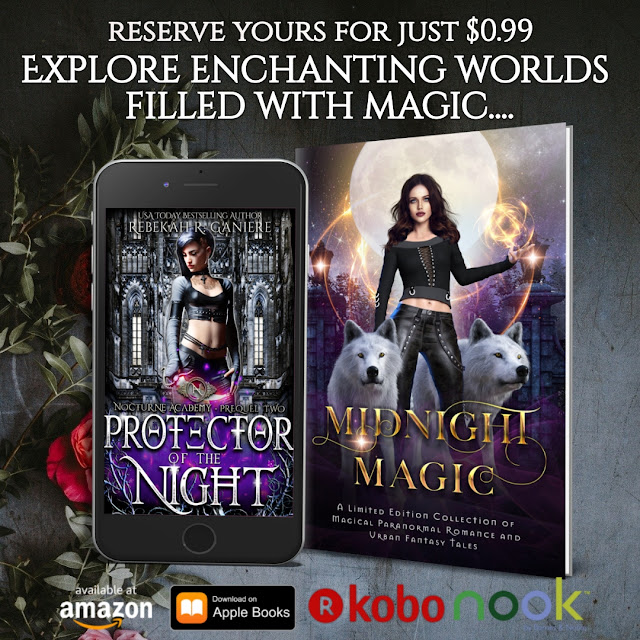 Reserve your copy now to read Protector of the Night by:

What’s the title of your book in Midnight Magic?

Protector of the Night

Tell us a little bit about it!

It’s a prequel to my series Nocturne Academy. The first story was about Melisandre and Eonis, a vampire and a vampress (vampire/sorceress) and how they got together despite the fact that they were enemies. This one focuses on Natalia and Zander (werewolves) who are best friends of the vampire couple but can’t stand each other. In the book the vampires are forced to confront their families and make some hard decisions while Natalia and Zander try to protect them from being assassinated. Natalia and Zander must work together in close quarters despite not being able to get along at all. We will see if they can work together to save everyone’s lives though.

Natalia is feisty. Unlike other werewolves she is actually quite old because she is blood bonded to a vampress whose blood keeps her healthy and alive. She was thrown out of her pack because of her health problems and she was left to die. Melisandre found her and took her in and because of that Natalia has a fierce bond to protect Melisandre at all cost.

Is it part of a bigger series or world?

Yes. It is a prequel to my series Nocturne Academy. Which is about the couple’s son who is in love with the Vampire Princess but he isn’t allowed to be with her in anything more than a bodyguard capacity because of who she is. That series is an RH with other vampire heirs wanting her as well. But this book is fun because you get to see what happened between the relationship between the two families long before the kids are born.