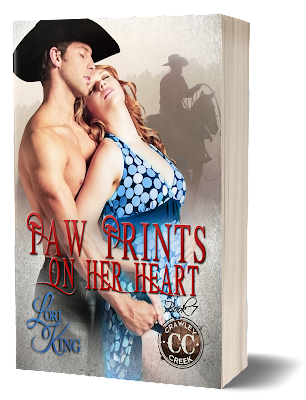 Payton Storm served her country with honor and loyalty, until an IED ended her career and scarred her for life. Struggling to overcome PTSD and find her purpose in life again, she agrees to a long-term stay at Crawley Creek Ranch under the care of a PTSD specialist. She’s surrounded by happy people who have no comprehension of the nightmares she battles, and a four-legged furry friend who’s supposed to be her lifeline to recovery. What could possibly go wrong?
Single father, Luke Gillian, has been the Montford veterinarian for most of his adult life. In fact, he’s barely left the town he grew up in. Arguments with his belligerent teenage son, and the pressure of a down economy have left Luke in a dark place. Until a ray of sunshine appears in his life with her injured service dog. Could Payton be the change his life needs?
Two people with too many problems to open their hearts, but fate won’t take no for an answer. 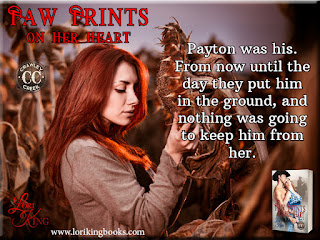 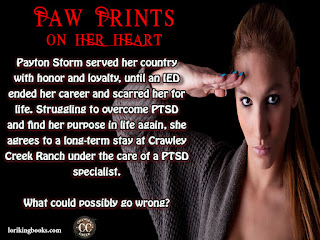 Facebook post:
Scarred by war, Payton Storm is a lost cause, until Dr. Luke Gillian offers her a chance to start over. With an accident prone service dog, and a belligerent teenager, this couple has more than their share pulling them apart, but fate won’t take no for an answer.
https://lorikingbooks.wordpress.com/pawprints/ 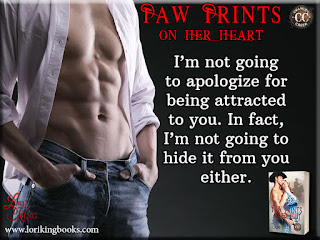 Moving as quickly as she dared, she followed him to the kitchen with her plate in her hand. “I can wash the dishes if you want to put them away.”
“You don’t have to do that. You’re my guest,” he protested.
“Think of it as my way of repaying you for your medical services today.” Payton went to step sideways around him to reach the sink and stumbled on Chinook who was still patiently following her around. Her knee twisted and buckled under her, but instead of hitting the floor this time, she landed against Luke’s rock solid chest, his arms wrapping tightly around her. Her nose pressed against his collar bone, and her lungs filled with his scent. Damn, she really wanted to lick him right there where his pulse fluttered beneath his scent.
“Are you okay?” His concern drew her attention away from her horny musings.
“Yeah.” Her voice sounded hoarse, and she cleared her throat. “I just moved too quickly I think. This dog seems to be everywhere all at once.”
“You two will find a rhythm soon enough. He’ll learn to anticipate where you’re going, and you’ll start sensing where he’s at. Then you won’t stumble over each other so much.” Luke held her still, and she was debating pulling away from him when his hand came up to cup the back of her head, his nails scraping lightly across her scalp. “Payton…”
She tipped her face up, and caught sight of the fire in his brown eyes before his mouth captured hers in a passionate kiss. The tingles started at their joined lips and traveled throughout her body centering on her nipples and the now dripping slit between her thighs. She sighed with pleasure when he pressed closer, his tongue dipping into her mouth and tangling with hers. Good lord, the man knew how to kiss.
He was masterful, his large hands supporting her as if she’d become and extension of himself, and his mouth making love to hers. She’d never experienced a kiss like this one, and she knew she’d never forget it until the day she died.
When they broke apart, panting heavily, he rested his forehead against hers. “I didn’t plan that, but I’m not sorry.”
Payton’s eyes fluttered, and she looked up at him warily. “You’re not? I mean, I didn’t plan it either; it just sort of happened. We can forget it ever happened, okay?”
“No, not okay.” Luke was frowning now, “Why would I want to forget it? That was incredible. There’s fire between us Payton.”
“It’s probably just because it’s been so long since I was kissed. I mean, I was overseas with my unit and then in the hospital for months on end, and—”
Luke actually took a small step backwards now. “So you’re saying you’re just horny then? It could have been anyone?”
She shook her head, fighting to control the rising panic in her chest, “No, I just… Look, I’m not in the right headspace for a fling, or a boyfriend, or a lover, or anything.”
Luke’s visage grew even more firm, and he released her completely. “Your situation is duly noted; however, I’m not going to apologize for being attracted to you. In fact, I’m not going to hide it from you either. You can pretend you’re not feeling the buzz from that kiss, but you and I both know you are.”
“I don’t know what I’m feeling right now.” She spoke softly, dropping her eyes to the ground. “I just know I’m not ready for it, whatever it is.” 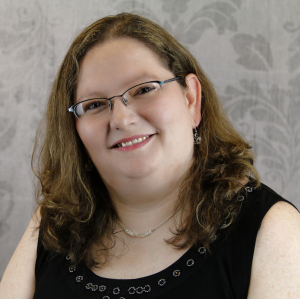 Lori King is the author of more than twenty-five Amazon best-selling romance novels, as well as a full-time wife and mother of three boys. Although she rarely has time to just enjoy feminine pursuits; at heart she is a hopeless romantic. She spends her days dreaming up Alpha men, and her nights telling their stories. An admitted TV and book junkie, she can be found relaxing with a steamy story, or binging in an entire season of some show online. She gives her parents all the credit for her unique sense of humor and acceptance of all forms of love. There are no two loves alike, but you can love more than one with your whole heart.