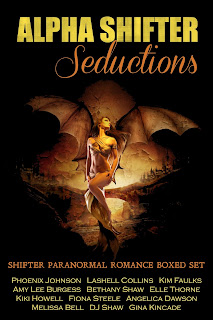 
Woo Hoo!It's finally arrived! This special day where I can share the spectacular cover designed by the one and only, amazing, multi-talented paranormal author Rebecca Hamilton for a very special boxed set of sizzling shifter romance to be released September 29th! I'm so excited!

This box set is packed with sexy, seductive, and extra scintillating stories that will leave you breathless! Dragons, werewolves, big cats and more! Without further ado...
Here's all the awesome info! 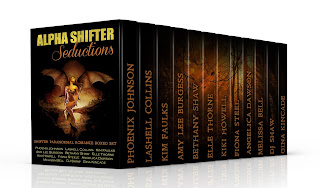 Alpha Shifter Seductions features your favorite NYT, USA Today, International Bestselling and Award Winning Authors bringing you a scorching ***ALL NEW*** book collection of never-before-seen page turners filled to bursting with seductive shifters.
These hot Alphas will seduce you as you follow dragons, wolves, big cats, and other shifters behind closed doors and between the sheets toward that happily ever after every romantic at heart secretly craves.
Find out what pleasures these Alphas can offer when the temperatures shift!

Kitsune's Raven by Phoenix Johnson
She's a Fox. He's a Raven. From opposing sides of a shifter clan war, their relationship is against the rules...but nothing is sweeter than forbidden fruit.
When Kitsune returns home for a fireworks festival, she doesn't expect to run into Karasu, a handsome young man with a smile that melts her heart and dampens her panties. Their attraction is instant, their love bright and hot. When she discovers he's from an enemy clan, and a Raven shifter, she fights her instincts and the clan laws to be with the one she loves.
Will their love be the balm to heal the rift between the two clans? Or will it spark an all-out war?

The Claiming by Lashell Collins
Xander knows his destiny is to lead his pack as their Alpha, and he’s willing to enter the savage Claiming to prove it. First he’ll have to claim Antonia’s heart, because every Alpha needs his mate.

Savage by Kim Faulks
The transition from woman to wolf is a right of passage, one hidden in secrecy and terrified whispers of those females left behind. Not all who transition live to warn the others, and so the female population in the packs dwindle. Trapped by the call of the moon and her own body’s yearning to mate, Mia does the only thing she knows—run. Can she survive when her scent sends the males in her pack into a frenzy? Or will two unlikely Alphas show her that both pain and pleasure are two sides of the same coin?

Love Like Wings by Amy Lee Burgess
Dragon shifter Sebastian knows the value of things but no one can put a price on Alexa, the woman he knows is his mate. He has three days to convince her they belong together or he will lose her forever. Can he overcome Alexa’s pride in time?

Claiming His Mate by Bethany Shaw
Erik hasn't stopped thinking about Lexi since he was forced to leave town three years ago. When he returns, he is devastated to learn that Lexi has moved on. It’s for the best. Wolves don’t mate with humans. But there is something about Lexi that keeps drawing him in. Will he be able to claim her for his own? Or has he lost his chance for good?

Complication by Elle Thorne
Bootilicious Laken Araya has to serve as a judge in the equivalent of a shifter Supreme Court. No problem right? Until the one presenting the case is a one-night stand she never should have had.

When the Snow Flies by Kiki Howell
On a spiritual journey to heal after a tragic accident, Anna thought the worst that could happen while walking in a labyrinth was to be taken by a stranger. A human stranger. Little did she know her meditation would capture the attention of dragons.

Unbroken by Fiona Steele
When curvy Emma is castaway on a remote island, she suspects the gorgeous and mysterious Davian Belmarric might be the lost alpha of the winged horse shifters known as the Pegasi. Will a wounded alpha and a woman who belongs to another risk everything to find a future together?

Not Your Bitch by Angelica Dawson
Zoe doesn’t like being Elliot’s bitch, but doesn’t think she can do better. Linc is bound to prove her wrong, by making her his bitch, his mate.

Ngyong's Tiger by Melissa Bell
Ngyong is a secret part of Japanese Folk Law - He is the last of his line, and his family's tales of the 'Legend of the Fox' will die along with him. He is resolved in his decision to never take a mate.
Savannah is Ngyong's new neighbor, she's beautiful, curvy in all the right places and she likes what she sees on the other side of the fence. She has her own secrets, ones that could get them both killed.
It's impossible to outrun your fate, especially when it's all claws and Legend.
(Five Brothers Series Spin-Off)

Changeling's Revenge by DJ Shaw
Peyton is on a mission to find her Fae family and find out why she was left out in the human world to die. And for that she was going to need some help. Enter Basil, a shifter with a chip on his shoulder and banishment under his belt. With this kind of firepower backing her, she hoped her family had a really good answer to her question.

a Rafflecopter giveaway
Posted by Lady Gina Kincade at 12:00 PM